The world’s first commercial oil well was drilled in the late 1850s. A half-century later, oil accounted for only 2% of the world’s energy usage. Fast forward another 50 years, however, and oil was accounting for one-quarter of global usage. It’s a familiar pattern: energy transitions happen gradually, but not evenly—including today’s.

The general destination of this energy transition is clear; murkier is what the path there will look like. Brunswick surveyed opinion leaders in the US and UK to better understand where we are on that path, and the complexion of what is—and what isn’t—changing.

Having people share considered yet digestible views on such a complex, dynamic topic is obviously tricky. The transition entails both the emergence of a dozen or so new technologies as well as the transmuting of multiple fuel sources.

We began by asking a question that brought together the many different tracks of the transition and allowed respondents to articulate their beliefs in concrete terms: “How would you invest $100/£100 across a basket of energy sources for a maximum return in 10 years?”

We also wanted to understand where they stood on other key questions: Who should pay for the energy transition—and who actually will pay?  When will the transition be complete? Whom do you most trust to lead the way? Which technologies have the most momentum and scalability?

The respondents represent the top 10% of the public in the US and UK in terms of their professional experience, their educational attainment, their news readership, and their engagement in financial, political and social issues. In the UK, they were split evenly between Conservative and Labour voters, while in the US the balance was 54% Democrats and 39% Republicans.

It’s research we’ll be revisiting and updating to see not only how the transition’s trendline is moving, but also the pace and nature of that movement.

Here's What We Found

In both the US and UK, solar power attracted roughly 20% of respondents’ hypothetical $100/£100 investment, making it the most popular opportunity, while more than eight out of 10 in both countries agreed that the world should use more of it. Collectively, non-fossil fuels—which included on- and off-shore wind, hydropower, hydrogen, biomass and nuclear power—attracted $76 out of $100 investment dollars in the US, and £87 out of £100 in the UK. 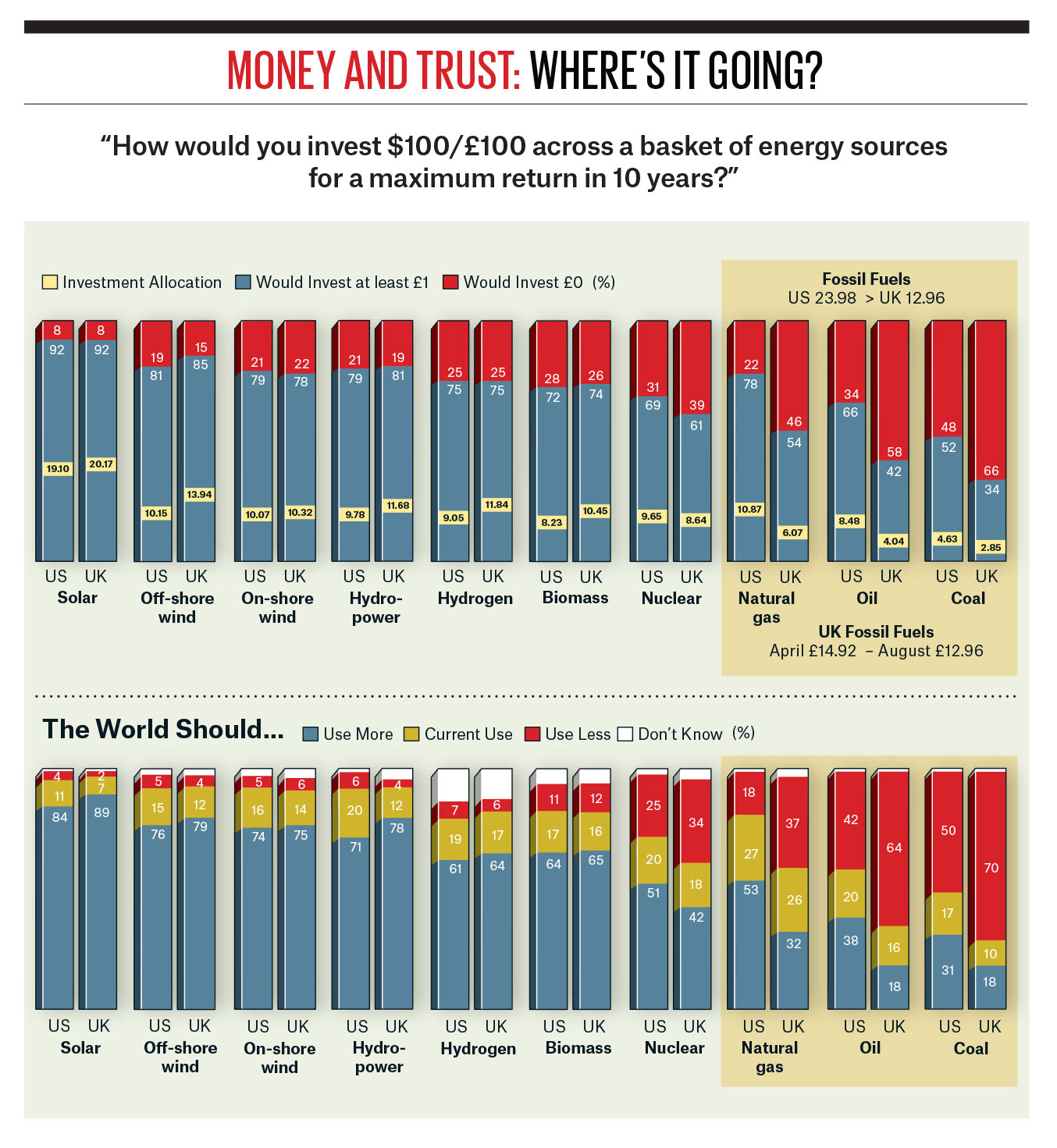 In the four months between our first and second survey (April to August), the amount of potential investment that fossil fuels—natural gas, oil, and coal—attracted in the UK fell 13%, from £14.92 to £12.96. Interest in fossil fuels in the US in August attracted only one-quarter ($23.98) of hypothetical investment capital.

When asked who they trusted to make the right decisions regarding the energy transition, fossil fuel producers came bottom of the list in both the US and UK. Renewable energy producers and the tech sector topped both lists.

That’s an outcome respondents seem resigned to, even though only 22% felt that consumers should pay for it. Roughly half (45% in both the US and UK) felt that oil and gas producers should pay for the transition, but only one in four people in the UK believe that will happen, and only one in three in the US do. The assumption that consumers will actually bear the costs of the energy transition corresponds to a significant decline in optimism about whether the world will actually complete the energy transition and achieve net zero.

The divide by party over priorities was significant. Fifty-eight percent of Republicans felt promoting growth, even if it meant continued use of fossil fuels, was more important than lowering carbon emissions, an effort that might carry higher taxes or energy costs. Roughly 60% of US Democrats, along with UK Conservatives and Labour voters, went the other way, saying lowering carbon emissions was more important even if it resulted in slower growth. This trend was repeated on other key questions, with the partisan split being more evident in the US.

This divide also surfaced on the question of “moonshot” investments. We asked: Is climate change so serious that government, business and the financial community should put aside traditional models of investment/return and take a “moonshot” approach to developing transformational technology? Or should they follow the traditional investment/return model and provide the right conditions for transformational technology to emerge? Only a majority of Republicans (60%) favored market forces, while a strong majority of UK Conservatives, Labour voters, and Democrats wanted “moonshot” investments.

Bucking the trend in fossil fuels was natural gas: over half of US respondents said the world should use more of it, and allocated about 10% of their hypothetical investment toward it.

•Traditional oil and gas companies and utility providers will be less important in the energy sector than new technology companies.

Asked with whom the oil and gas sector should partner for the energy transition, the tech sector came second only to governments.

While confidence and optimism in tech’s capabilities are high, knowledge of their innovations is quite low. From a list of 10 clean-tech innovations (drawn from Bill Gates’ How to Avoid a Climate Disaster), a majority of respondents felt they could only explain two to a colleague: electric vehicles and batteries. 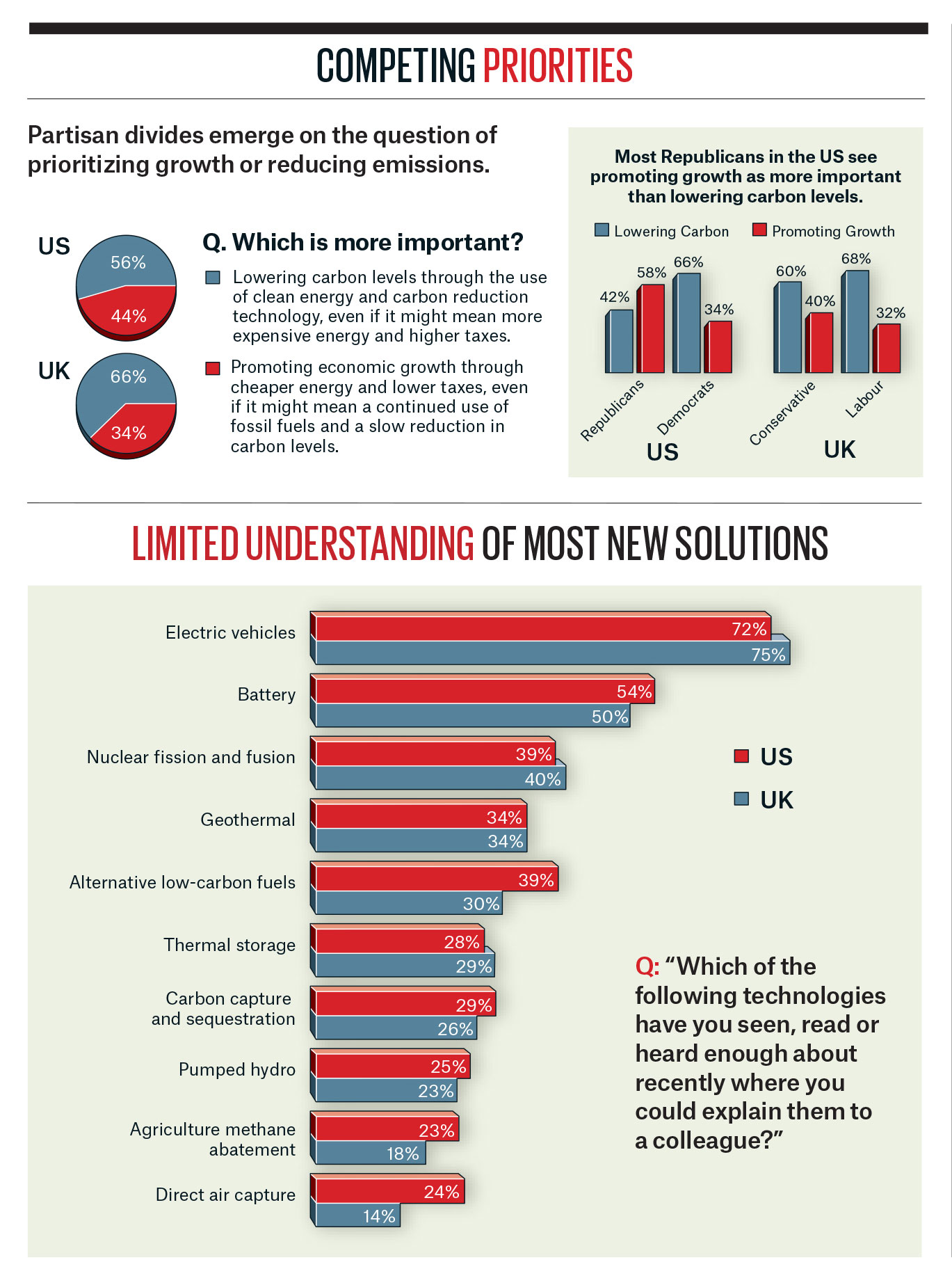 6 Takeaways for the Energy Sector

1. Oil and coal producers will face mounting skepticism and resistance in the policy debate and in public discourse. For the moment, support for natural gas remains resilient, particularly in the US, but we may be nearing the end of that bridge.

2. Producers of fossil fuels will continue to be stuck at the bottom of the trust ladder until they can make the case that they are critical to the transition and part of the solution, rather than a problem to be cleaned up.

3. There is little appreciation for the energy sector’s investments in facilitating the transition. This feeds the belief that costs will be passed to consumers, erodes confidence in the transition and limits political support for the sector.

4. Partnerships with government, the tech sector and other institutions are not only advantageous, but also expected as a demonstration of commitment to the energy transition and the climate.

5. There is permission to think big. Opinion leaders are expecting businesses and government to take a “moonshot” approach to a new clean energy and zero carbon future.

6. There is an enormous opportunity for companies across the energy sector to educate stakeholders and the public on cleantech innovation and share the mantle of a leading “clean-tech company.”

Patrick Handley, a Partner, is co-head of Brunswick’s Energy & Resources group. Brian Potskowski is a Partner specializing in climate who has spent more than a decade focusing on the energy transition. Jeremy Ruch is a Director specializing in opinion research, issue management and corporate reputation with Brunswick Insight. All are based in London.

All the Difference in the World

How you make the argument for climate action significantly affects the extent to which the public supports it, according to Brunswick research across eight major economies.