“How are you?” is a question we’ve all been asked thousands of times, and we answer: “fine, thanks.” It’s an exchange that symbolizes the shallow discussions on mental health that take place in the workplace. That is, until COVID-19.

“How are you?” remains a fixture of Zoom calls and work emails, but the question itself, and the answers it now elicits, seem less perfunctory. People are talking to colleagues and clients about how the pandemic has made them feel, the pressures of trying to be a teacher, parent, spouse and employee at the same time; they’re angry about racial injustices; they’re anxious about their health, their finances, or their professional future.

Mental disorders affect one in four people worldwide, according to the WHO, with devastating consequences for public health. Severe mental health issues lower life expectancy by up to 25 years, while a person dies from suicide every 40 seconds. Loneliness, which one in three young adults report feeling, is as destructive as smoking 15 cigarettes a day. The WHO predicts that as these conditions worsen, mental health problems will be the leading cause of mortality and morbidity by 2030.

The economic costs are similarly staggering. The World Economic Forum estimates that depression and anxiety cost the global economy $1 trillion annually. Deloitte reports poor mental health costs UK employers up to £45 billion ($55.5 billion) every year, while The American Journal of Psychiatry estimates 1 in 5 US employees will experience a mental health condition each year, causing $193 billion in lost earnings annually—employee mental health costs have risen twice as fast in the US as other medical expenses.

Data on mental health often relies on self-reporting, leading some to question its validity. Key projections are built not only on that self-reported data but also researchers’ assumptions. Neither are air-tight. Still, the big picture and trend lines they paint are hard to argue with: mental health, already so deadly and expensive, is destined to become more so if nothing changes. 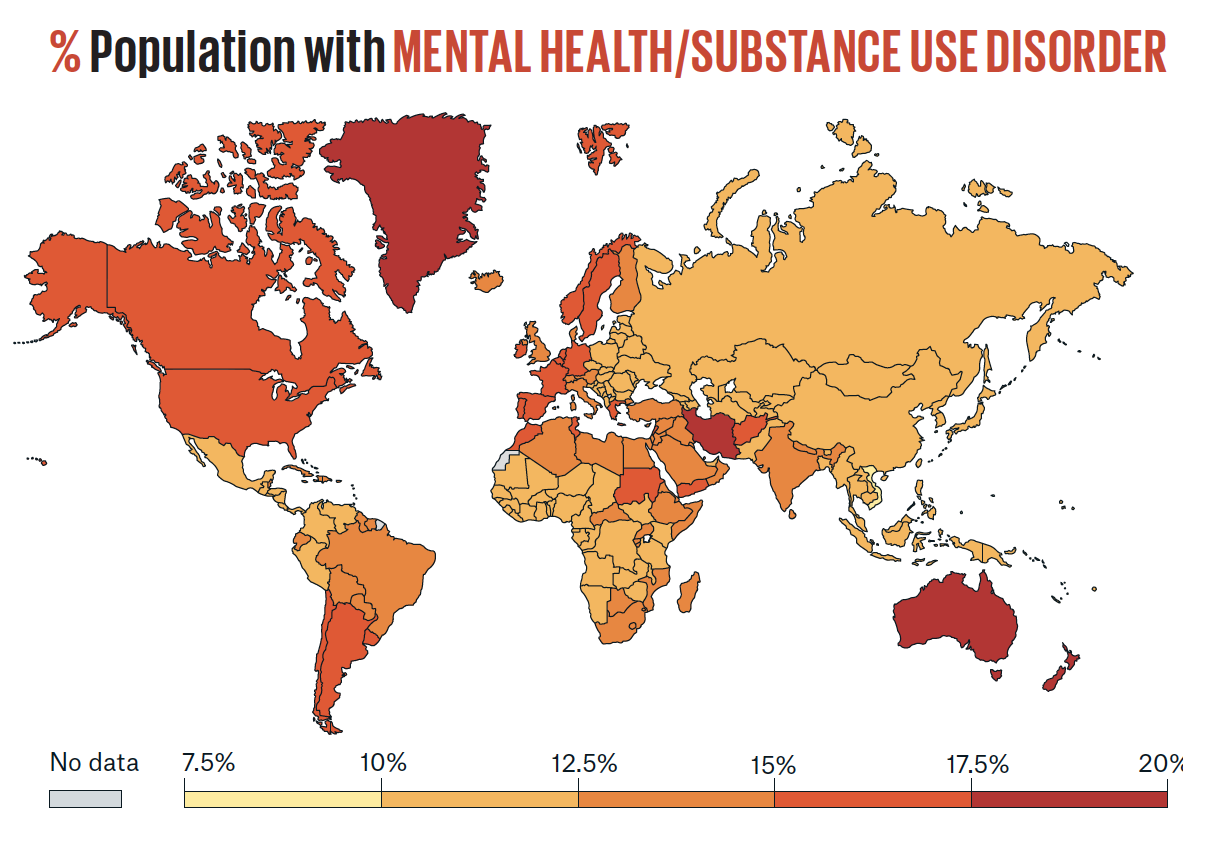 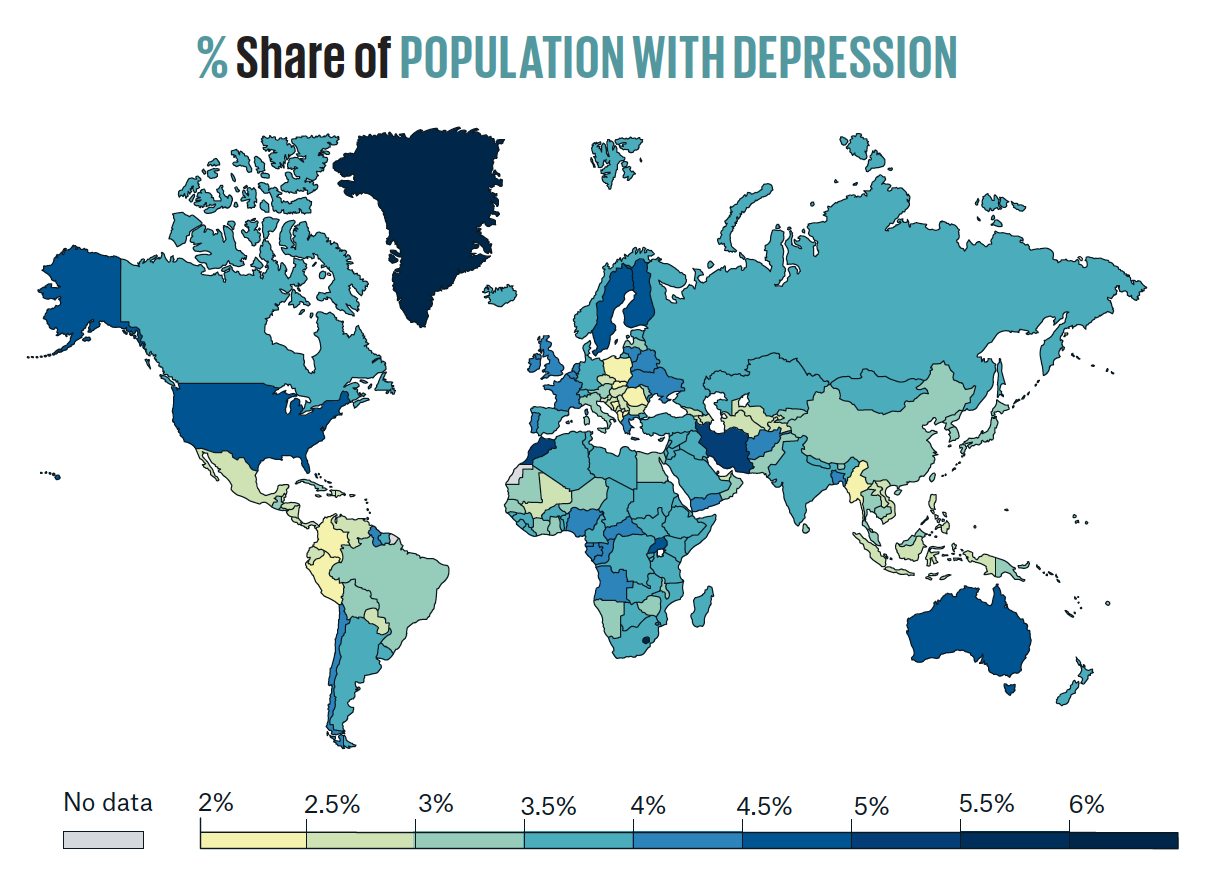 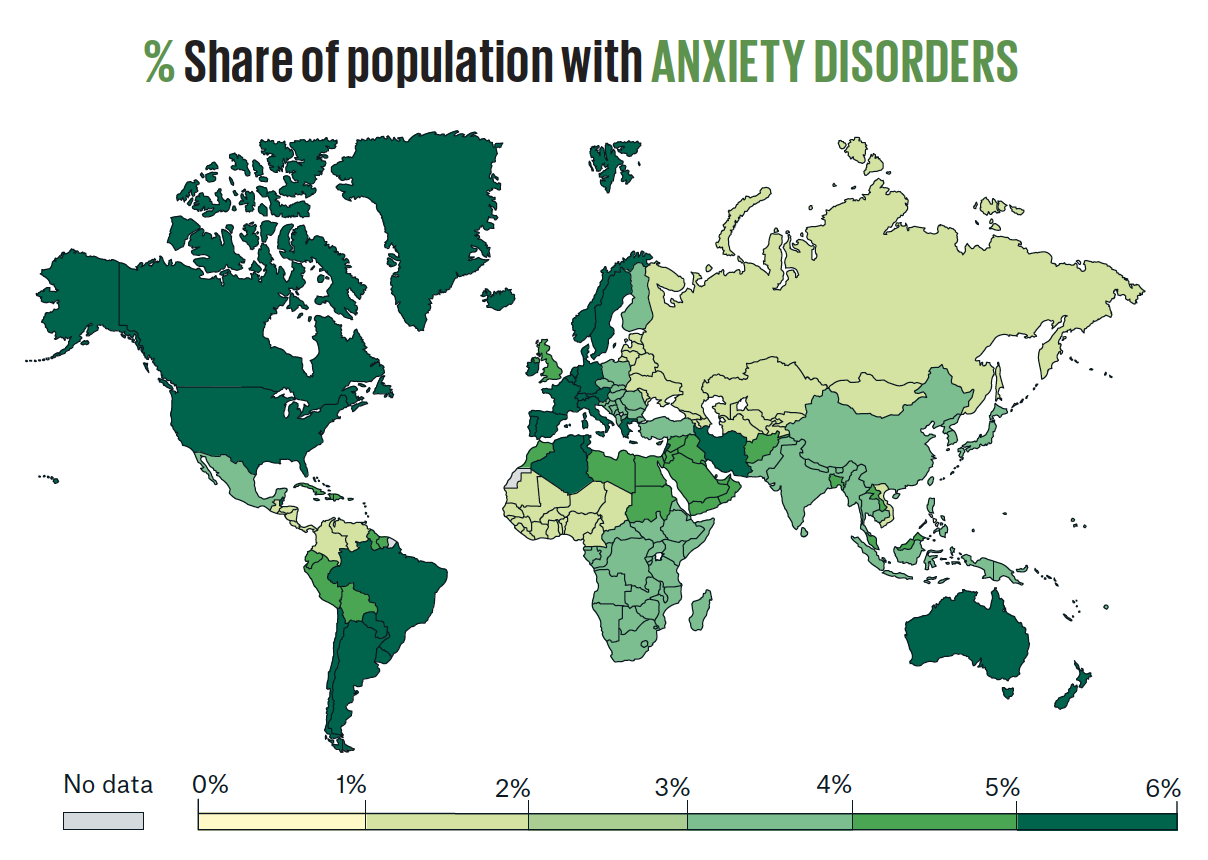 Source: Our World In Data

Worsened by our Workplaces, Even Those with “Corporate Wellness” Programs

Last year, Arianna Huffington told the Brunswick Review there was “a crisis of well-being” in the workplace. Ms. Huffington, long a self-professed “workaholic,” had converted to promoting workplace well-being after collapsing at her desk from exhaustion. Hitting her head on the fall, she awoke hours later in a pool of her own blood. Ms. Huffington’s scenario was extreme but emblematic of a growing problem: In 2019, the WHO officially recognized “burnout” as a medical diagnosis.

Those in the gig economy often work as long as Ms. Huffington but with the added strains of far lower pay and no benefits. Younger workers seem particularly vulnerable: a CNBC report last year found that one out of every two Millennials had left a job for mental-health reasons—a concern for employers, as Millennials are projected to comprise 75% of the global workforce by 2025. It’s a global issue: in India, for example, a 2017 study found more than four in ten private-sector workers reported anxiety or depression.

The pandemic, according to the UN, carries “the seeds of a major mental health crisis.” Headlines from the UK, the US, and China all report on social-distancing and lockdown intensifying existing mental health issues—more than 80 percent of young adults in the UK with existing mental health conditions, for example, reported their symptoms worsening. Drug overdoses, suicides, domestic violence and child abuse have all climbed in the US since the onset of the pandemic.

For those who have not been laid off, working from home creates isolation as well as new stresses, particularly for parents of school-age children. Screen-time is now essential to stay professionally connected—yet switching off screens has long been cited as vital to personal well-being. Salesforce CEO Marc Benioff said COVID-19 had taken “an emotional toll” on his company’s workforce, with more than one in three employees reporting mental-health issues.

Whether financial strain or hospitalizations, the pandemic’s effects are being magnified in low-income populations—those already facing the greatest risk for many mental-health conditions, according to the WHO. It’s a vicious cycle: while economic inequality has exacerbated the pandemic, the pandemic has exacerbated economic inequality - and the mental health conditions associated with it. Analysis from McKinsey, for example, shows that suicide rates appear broadly correlated with increases in income inequality.

Once you’ve had a workplace conversation about mental health, you can’t un-have it.

Businesses that stand out for their efforts on mental health take action in three areas – we call it the Leadership Model:

1. Drive change within the business. This means their policies and culture, their product and services, account for mental health.
2. Go beyond their business. This can be through partnerships, coalitions, or philanthropy—contributing expertise, data, innovation, and resources.
3. Advocate for change – raising awareness, mobilizing others, acting as a voice for wider change, often through their CEO and senior leaders.

One company that’s tied these together well is Lloyds Bank. Well before the pandemic, the company had implemented a number of workplace initiatives, including resilience training for leaders and managers, creating an annual “Time to Talk” day, and covering mental health in employees’ insurance. Lloyds Bank also partnered with the charity Mental Health UK to create new services for people to talk about their mental health issues. It’s been through this partnership that Lloyds has worked to lessen the effect of COVID-19 on customers’ mental and financial health. The company has also produced ad campaigns to encourage discussion around the normally shame-inducing topic of finances, while its CEO, António Horta-Osório, has spoken repeatedly about the importance of mental health. “Changing the corporate mindset on mental health is, I believe, the most fundamental step towards changing things for the better,” Mr. Horta-Osório said. “We need to remove any trace of stigma.” His words have been powerfully matched by his example: Mr. Horta-Osório took a leave of absence himself in 2011 after suffering from stress. 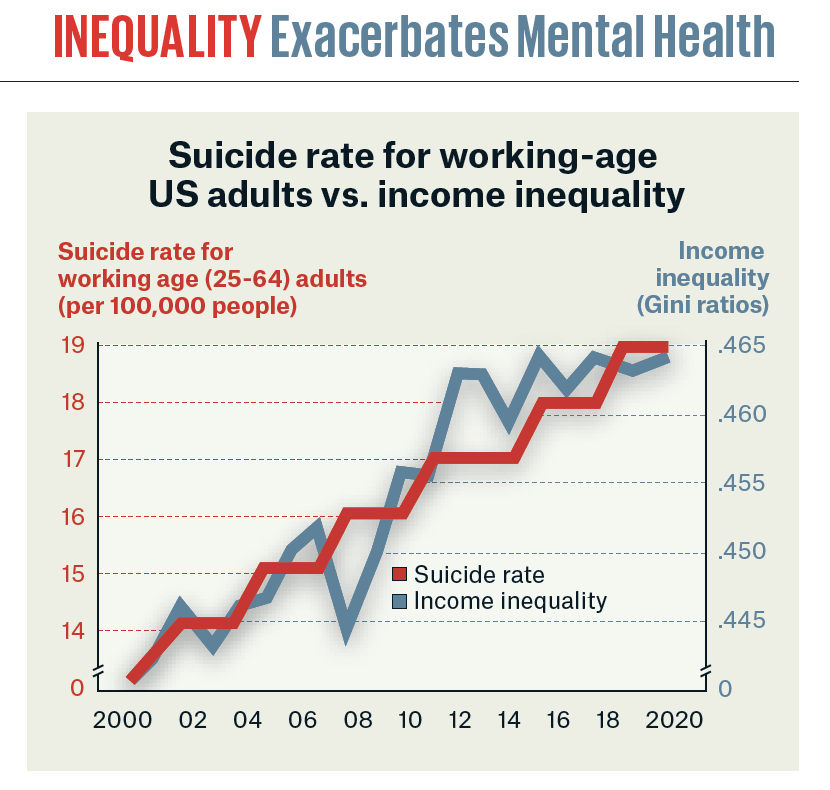 Mental health is a broad, complex issue. It can be bewildering for business leaders looking to take meaningful action. Here are three practical areas of advice we discuss with our clients.

1. Emphasize purpose. Purpose in life predicts both mental and physical health, including longevity. For all the eyerolls that corporate purposes often generate—we’ve written before about purpose and its pitfalls—done well, a purpose can inject similar meaning and focus to a company as it does an individual. And it’s the alignment of individual purpose with that of the company one works in, that produces mental health benefits.

2. Connect to Inclusion & Diversity. Open For Business, a coalition of leading businesses working to advance LGBTQ+ rights globally, has compiled years of research on the business case for diversity and inclusion. Part of that argument entails a compelling mental health component. In short, discrimination damages it—stress, anxiety, burnout—while inclusion fosters a greater sense of affinity and self-esteem, contribution and collaboration.

3. Focus on Causes, not Cures. Standard corporate responses have been palliative: Creating mental health first-aid positions, offering training and counselling sessions, and training leaders to notice the signs. One step further are corporate-wellness programs: free yoga classes, mindfulness sessions and fruit bowls. Yet an article in the Harvard Business Review last year questioned the $8 billion corporate wellness industry: “These things are intended to offset work stress, and at the same time obliquely reinforce the idea that work stress is the inherent by-product of being good at what you do and working hard at it.” In other words, real the challenge for business is to look hard at how their working practices and business models may be contributing to poor mental health.

4. Stay the Distance. Initiatives to raise awareness should be seen as the beginning of a longer conversation. The long-term goal is to build a culture of well-being and be a voice for broader change—both of which take time. “Mental health is not a one and done conversation,” Qualtrics CEO Ryan Smith wrote earlier this year. “One way to help people deal with uncertainty is by providing consistency, especially in how and when you communicate.”

Seven Things to Watch Out For:

1. Over-empathizing
People want to know you understand, but they’re also looking to you for leadership: have a plan, but recognise that the plan may change.

3. Putting too much responsibility on the individual
Culture and colleagues can be resources.

4. Presenting mental health an “HR issue”
It’s a priority for the whole business, not one department.

5. Taking a “patchwork” approach
Have a global approach, locally adapted.

6. Getting stuck in the short-term
Keep the horizon in mind, stay connected to purpose.

The Future of the Mental Health Conversation

As we work on mental health issues with clients, it’s clear where the conversation is going. Increasingly, companies are being asked to think beyond their own businesses and consider their responsibility for the mental health of their customers and consumers.

Of course everything starts with those who work at the core of the company—your workforce—employees and contractors. But just as a decade ago we saw public anger at many food companies making profits at the expense of the physical health of their own consumers (for example, promoting sugary drinks and fatty foods to children), so we can expect a similar focus on the mental health that businesses have through their products and services.

Banks will be asked to consider the mental health impacts of lending conditions; social media platforms will be under pressure to take responsibility for the psychological impact of their content; fashion companies will be challenged on the effects of their advertising imagery on issues like body image and self-esteem; smartphones manufacturers will be asked about the effects of screen-time on mental health. In other words, we expect the conversation about mental health to expand out to include suppliers, the communities that businesses operate in, and ultimately society as a whole. 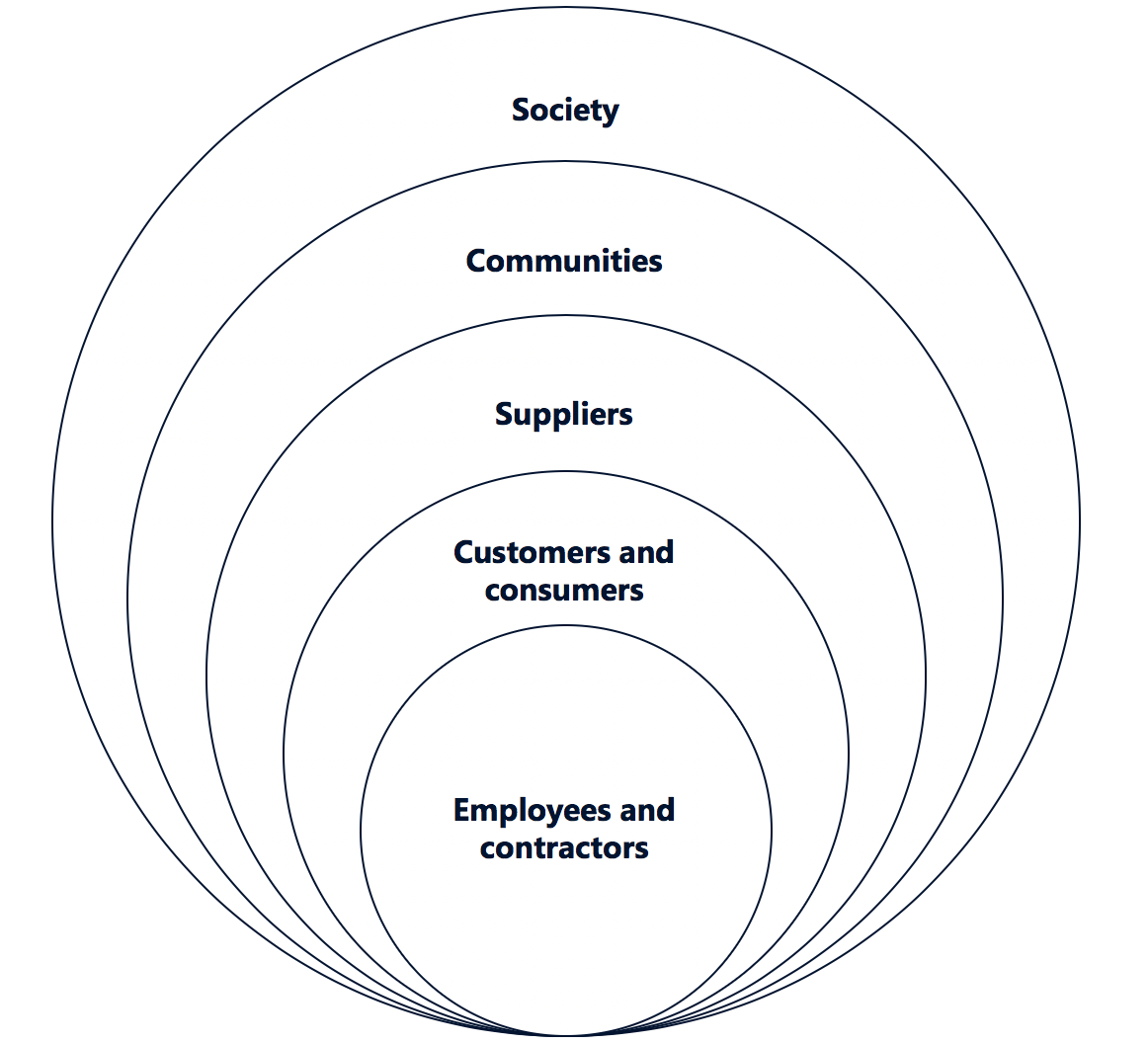 A company's "mental health footprint" extends beyond their own business.

We think of this as a company’s “Mental Health Footprint,” analogous to a “Carbon Footprint.” Greenhouse gas emissions are categorized into three groups, or “scopes.” To oversimplify, Scope 1 is a business’ direct emissions, like fuel burned in a company-owned vehicle. Scope 2 is indirect, and covers the emissions caused by the electricity the company purchases. Scope 3 is extensive, covering all other indirect emissions. For oil and gas companies, that means the emissions caused by users of their products, by their suppliers, and even their own business travel.

For mental health, the corporate conversation is largely focused on “Scope 1”—as climate change once was. For both, leadership comes from thinking beyond your own business, and taking responsibility along the entire value chain. Thinking in terms of “Scope 3 mental health impacts” will not be easy, but has the potential to drive progress in fundamentally innovative ways.

Jon Miller and Meaghan Ramsey are Partners in Brunswick’s Business & Society practice, and based in London.

This article appears courtesy of the Brunswick Social Value Review.

One state’s readiness could serve as a model for the nation and the world. “Coronavirus Slayer” K.K. Shailaja, Kerala’s Health Minister, talks to Brunswick’s Khozem Merchant.

Greg Murray, CEO of KOKO Networks, spoke to Brunswick’s Kirsty Cameron about how conscious capitalism can build a better world.