Cassava Technologies owns and operates “Africa’s digital railroad,” the only broadband network that extends across the continent. Thirty years in the building, Cassava’s network and its unique digital solutions are driving commerce and elevating quality of life across the continent. President and CEO Hardy Pemhiwa, a more than 20-year telecommunications veteran in Africa, talks with Brunswick Partner Carol Roos, about the potential for Cassava Technologies to help transform the continent.

In your recent Fortune interview, you said, "For people who have capital to deploy, Africa is ready." What's the argument for investing in Africa?
India has 1.4 billion people. Africa has 1.3 billion people. India's GDP is around $3 trillion. Africa's GDP is around $3 trillion. Yet look at the level of investment that has gone into India versus Africa. When you look at the size of Africa, at the pivot to democracy across the continent, at the literate young population, at the voracious appetite for new technologies, at the need for healthcare—I don’t mean to sound disrespectful, but I think it would be foolish for any business leader not to be taking a hard look at Africa, and asking, "Why am I not here?"

Does the Russian invasion of Ukraine have implications for Africa? For Cassava?
Any time you hear of war, you know that innocent people are the ones who will suffer. And it’s particularly tragic given the peace dividends going back to the Second World War are there for everybody to see. I would dare say some of the progress in our industry, the tech industry, may not have been possible if we had not had such a long period where spending could be redirected to productive sectors rather than to any kind of military effort.

That’s at a global level. From an African standpoint, the impact is likely to be one of awareness. Africa is constantly competing for attention. On a good, calm day, Africa needs to shout a few decibels higher than others in order to be noticed, particularly around the area of investment. Any kind of noise that distracts the rest of the world moves Africa even further down the agenda, which is unfortunate.

In terms of Cassava Technologies specifically, we will continue to do what we have always done. We can't wait for perfect conditions to continue to deliver on our vision of a digitally connected future that leaves no African behind. We started our journey when conditions were far from perfect. For any business leader, dealing with volatility, uncertainty and complexity is a daily thing now.

Hardy Pemhiwa is President and CEO of Cassava Technologies.

For investors, what kind of opportunity does Cassava Technologies represent?
Cassava Technologies is unique in the ecosystem that we have built. We are Africa's digital railroad. We own more than 100,000 kilometers, more than 62,000 miles, of fiber network, from Cape Town to Cairo, and all across Africa. That’s crucial, because when you talk about digital transformation, fiber broadband networks really provide the kind of digital infrastructure that you need to drive it.

Because Africa has lots of challenges with reliable power, we are developing solar renewable energy solutions for ourselves—and also for our enterprise customers, who on average suffer anywhere from an hour to as much as 12 hours a day of power outage, which requires them to have decent generators.

We also have data centers that are across the African continent as a way of bringing cloud services closer to the users. So, a fiber network, energy solutions and data centers—those three form the digital infrastructure underpinning that you really can't do without, and that people in other parts of the world in Europe or in North America take for granted because of the last 60 to 70 years of investment. So now that our platform has been fully invested and fully built, we are starting to build the digital services that transform lives.

The key for us is to keep driving down the cost of data. On average, Africans pay anywhere from 8% to 15% of their monthly income at a family level for one gigabyte of data. I mean that compares to anywhere from 1% to 3% from North America, Europe and Asia. So that ecosystem that we have built provides various touchpoints for anybody who would like to partner with us to reach consumers and businesses.

Crossing that many borders must have required diplomatic skills.
We have the consummate strategist, visionary, and diplomat in our executive chairman, Strive Masiyiwa. I remember 15 years ago when we started to build this network, one particular investor said, "Look, your chairman is a great evangelist for technology in Africa--but this whole thing of building fiber from Cape Town to Cairo is one of those pipe dreams that are good for the newspapers."

I'm glad to say that I did meet that same gentleman three years ago, and apparently he didn’t remember what he’d said 15 years ago. Because now he said, “This is the most amazing story that I've ever heard. Why didn't the big telecoms do this?" I didn’t remind him of what he’d said earlier. I just said, "We are Africans. We live here. We work here. We keenly understand what the continent needs. And the challenges we have to surmount. And we know that we just have to keep going."

What would you say about Cassava to investors who want their capital to achieve social as well as financial returns?
I would say we don't make a distinction. We have built our business from the ground-up for social impact. Just think about what universal and affordable access to telecommunications or internet access has done on the African continent. By some estimates from the World Bank and the African Development Bank, you can add 2% to 3% to the GDP of a country just by providing universal, affordable access to the internet.

Other studies out there show tremendous impact, particularly for women and mothers, from gaining a smartphone in their hand. Access to technology has a direct correlation to an increase in the family's GDP. 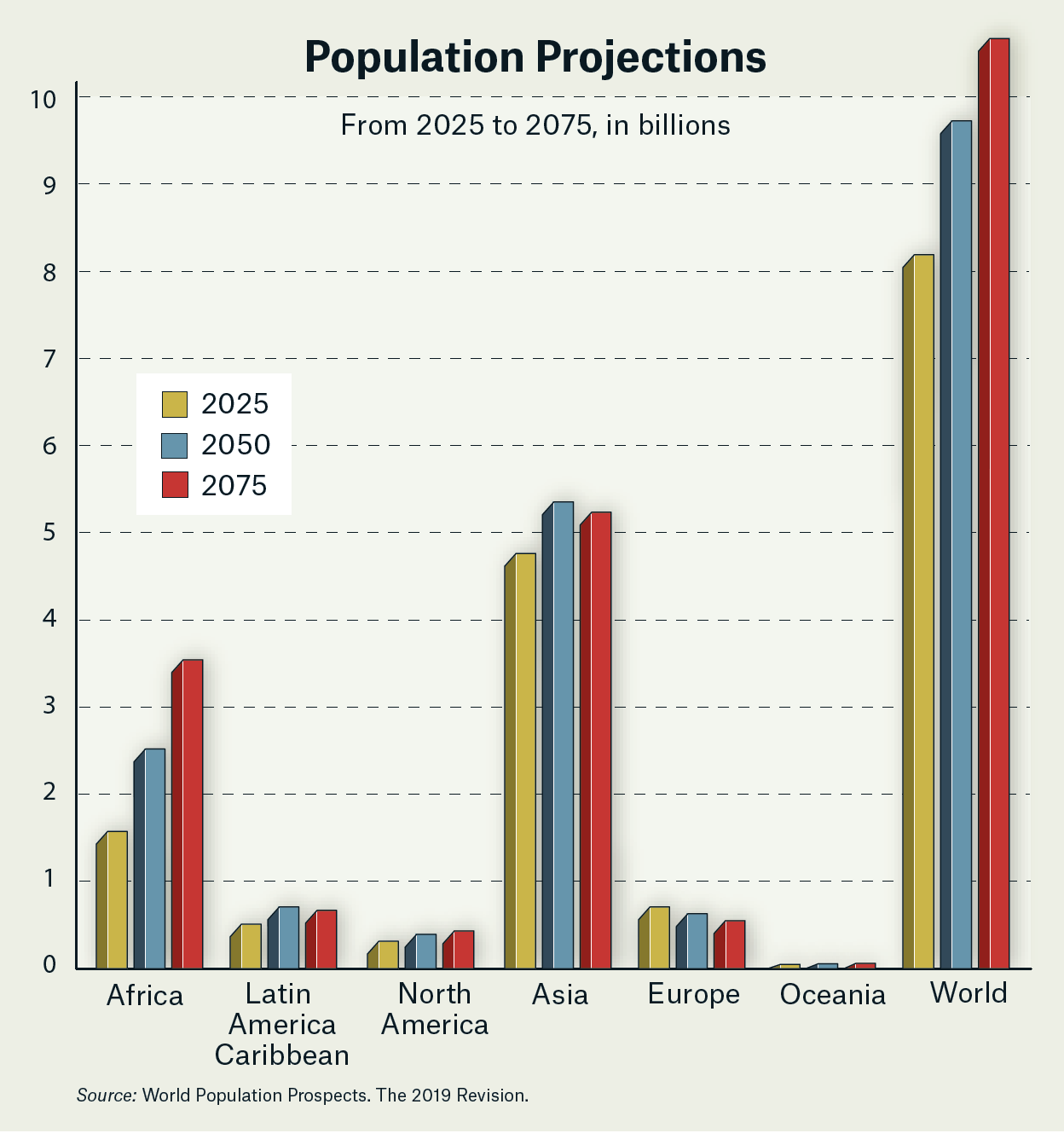 Can you talk a little bit about fintech and payments? It's such a foreign concept for people outside of Africa that there’s this huge unbanked population who haven’t been able to send and receive money.
You’ve got 500 to 600 million Africans with no access to formal banking services. In 2011, we were one of the pioneers of mobile money, which is really a basic SMS service with a trust account in between.

Essentially, somebody walks to an agent and gives that agent let's say $10. And they get an SMS back that says, "Now you've got $10 in your mobile money account." And now they can send an SMS to another person in another part of the country in that network. And that person with that SMS code walks to an agent where they collect the $10. After starting off person to person, this became person to merchant, merchant to person. Soon enough, the government realized, "Here's a quick way for us to collect taxes."

Today, we've got our clients who pay school fees with mobile money. We’ve got thousands of schools that sit on our platform that receive school fees from members of the family that are either in the diaspora or in the cities. Now, the tuition cannot be misused, because it's going directly to the school accounts that sit on the mobile money platform.

A mother can go to a doctor, and the daughter who is working in the city can send the money directly to the doctor during the consultation. So the mother doesn't have an opportunity to start thinking, "With this $5, it’s actually more important for me to buy a meal for tonight." You now have businesspeople who transact $1,000 a day, but if you mention going to the bank, they will look at you like, "Why would I ever go there? I mean to do what?"

Personally, I don't remember the last time that I paid a plumber or an electrician with anything but mobile money. It’s incredible to see what this has done in terms of just bringing people into the formal economic system.

You’re talking about children figuring out a way to make a dollar. You’re talking about women across Africa who wake up every morning and set up stores and marketplaces to sell vegetables and other produce. The entrepreneurial spirit is alive and well, driven by a highly informalized sector. And the lack of formal employment. We just don’t have formal employment opportunities across the continent. Employment is really created at an individual level.

How would you summarize the story of Cassava Technologies?
If you go back to 1993, only 5% of Africans had access to a telephone. Today, 85% of Africans have a mobile phone or access to a mobile phone. And our beginnings are really from that age, when our founder and chairman in fact challenged the government monopoly of the day in one of the countries on the basis that communication is a basic human right.

It couldn’t be that a state functionary sitting in an office could just tell you that you can't have a telephone. That’s where we started from. It has always been a journey of inclusion. Everything that we have built has always been around this digitally connected future that leaves no African behind.

We totally believe in the power of telecommunications and technology to democratize access to opportunity. A young kid going to school in the rural areas with access to technology all of a sudden has similar opportunities to somebody that is in a big city.

Similarly, in terms of access to primary health care, the doctor-to-patient ratio in Africa is very low. But now, a clinic in the rural areas run by a nurse can dial up a doctor, put them on a video link, and essentially have a consultation.

Are there instances in your daily life where you see first-hand evidence of progress?
A member of our staff went to see their grandmother, and the sister of this young woman had gone overseas for education, and the grandmother hadn't spoken to her in maybe eight years, since she left. The sibling was able to call up the sister, give the phone to the grandmother, and say, "Speak to your granddaughter." And the grandmother was just ecstatic. Enriching the life of a grandmother is the kind of impact we will never put in any reports.

Brunswick Partner, and member of the firm’s Chicago office, Carol Roos has advised clients on issues critical to their reputation, from Chicago, San Francisco and Johannesburg.