Matthew Futterman distills leadership lessons offered in his new book, "Running to the Edge: A Band of Misfits and the Guru Who Unlocked the Secrets of Speed."

I didn’t set out to write a book about leadership. I intended to write about a bunch of hippie runners in 1970s San Diego who called themselves the Jamul Toads. They came out of nowhere to win the 1976 national cross-country championship back when that was just about the biggest distance event in America other than the Boston Marathon.

But when I started to ask the Toads about the secret to their success, they all essentially gave the same answer: Bob Larsen. 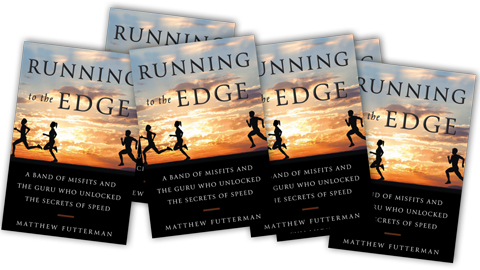 Hard-core runners revere Larsen, who is best known for coaching the Olympians  Deena Kastor and Meb Keflezighi to the podium in 2004 and guiding Meb to inspirational victories in the New York City Marathon in 2009 and the Boston Marathon in 2014. Larsen’s journey started nearly a half-century before that though, when he turned a small suburban San Diego high school into a running power and then a local junior college into one of the best distance teams in the country. How did he do that?

Yes, Larsen figured out how to train smarter and better before nearly any other running coach did, but training plans were really just a small part of his success. Larsen’s unconventional approach to both leadership and his sport accounts for most of it.

When the cross-country team showed up to meet the new coach at Monte Vista High School in 1963, they couldn’t figure out who he was. The running coach was usually an old crank who wore a windbreaker and had a whistle and a clipboard and barked orders. Larsen, who was in his early 20s at the time, wore shorts, sneakers and a T-shirt. He told the boys it was time to run, and then he led the way, building a trust equation on all those gallops through the dusty hills of eastern San Diego County.

Larsen ran with his runners until he could no longer keep up with them.

When he coached distance runners who had to do 20-mile weekend runs, he’d lead them through the first five miles, making sure they stayed behind him and warmed up properly. When he was guiding Meb through grueling workouts at 8,000 feet around Mammoth Lakes, he often rode next to his star pupil on a bicycle. The message was so simple: I am here with you, now and always.

It’s why he implored his runners never to train alone, because the group is more powerful than the individual, even in what might seem like the most solitary of pursuits.

Another thing Larsen’s runners always said about him—they almost never heard him raise his voice. Let the other coaches stand in the infield and scream to try to coax more speed. Larsen stationed himself by the track and delivered a few soft words: “Relax those shoulders,” or “Perfect.”

Sometimes it was, sometimes it wasn’t, but running for Larsen meant that you didn’t always measure yourself simply by where you finished in the race. A hundred different factors, including the quality of the competition, can determine who wins and who does not. For Larsen, success was about how much love and dedication you brought to your pursuit, both in training and on the day of the race.

“We don’t always get first place,” he would tell his runners, “but we always run to win.”

And wouldn’t you know, plenty of winning happened along the way.

Matthew Futterman, Deputy Sports Editor of the New York Times, is a former Senior Special Writer for the Wall Street Journal and the author of a previous book called Players: How Sports Became a Business